Accelerate Application Release with Environment as a Service | Quali Skip to content
For DevOps and Apps Teams
Torque
For NetOps, SecOps, and DevTest
CloudShell

Accelerate Application Release with Environment as a Service

Liquid Software flows through a pipe, and that plumbing needs to be properly sealed. Releasing your application with agility requires your environment—infrastructure, applications, and data—to be ready at every point in the pipeline, from development to test to production.

The different teams in that process face their own challenges around environments:

Since these three teams have conflicting priorities, they end up working in silos. This slows down automation efforts and keeps DevOps initiatives from spreading beyond a small group of individuals.

JFrog has partnered with Quali to provide a “single pane of glass” experience to address the challenges and needs of these organizations and enable true DevOps collaboration across these different teams. Quali’s “Environment as a Service” platform gives development teams on-demand, self-service access to blueprints that model both cloud resources and applications, making it easy to automatically deploy environments on the cloud (VMs or containers).

With JFrog Artifactory now integrated into Quali’s CloudShell Colony SaaS platform, you can make sure your latest artifacts are retrieved and installed on the target infrastructure, such as AWS, Azure, or Kubernetes

How Does it Work?

It only takes four simple steps to deploy even the most complex application environment “as a service.”

The first step is to configure your Artifactory server and other cloud accounts. This is typically performed by the IT/DevOps admin.

Step 2: Create and Launch a Blueprint

The next step is to set up a simple blueprint in YAML format and specify the default artifacts, security parameters and application components (e.g., microservices). 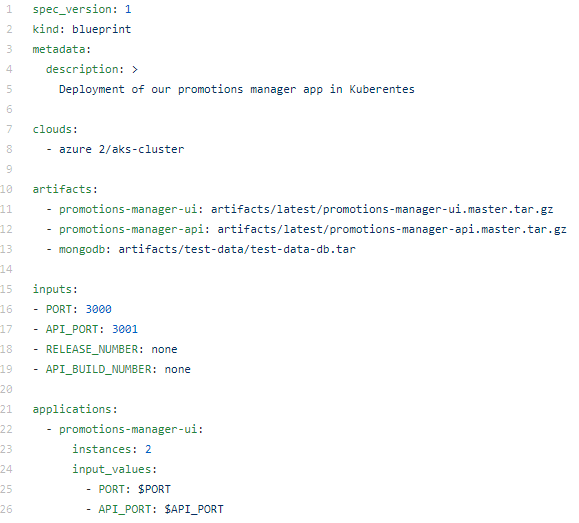 Once this blueprint is saved and version controlled in GitHub, it is automatically synced to your CloudShell account and ready to be published to a team of developers, testers, or pipeline DevOps tools.

At that stage, a developer can just select a blueprint and launch a new environment, also available through a REST API. Enter a few parameters, to change the default values of the artifact for instance, and click Launch Sandbox. 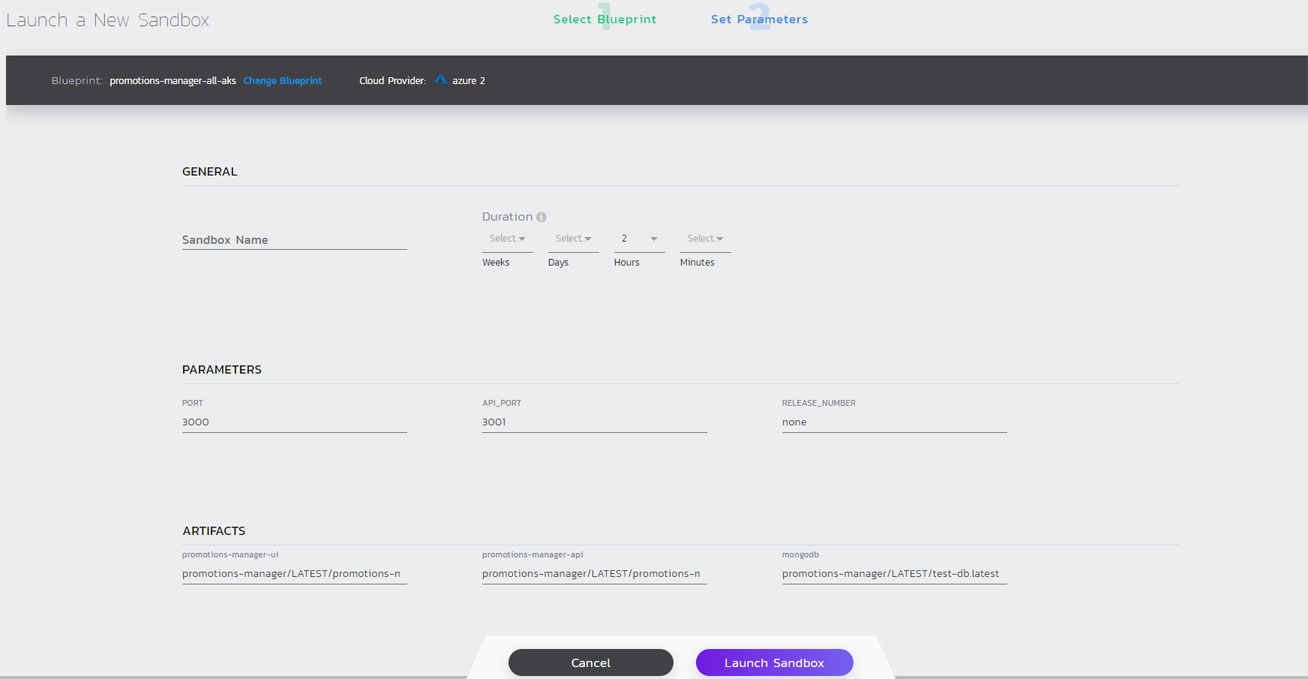 At that point, the CloudShell orchestration engine kicks in behind the scenes and dynamically creates and configures the complete environment. Before the release to production, each sandbox environment is considered ephemeral. That means the environment only lives for a specific duration, and is automatically cleaned up once it expires or is no longer needed. This enables IT to ensure proper and automatic disposal of these environments and control infrastructure costs.

Once the sandbox is up and running, it is available for consumption by the test process, including readily available shortcuts to application and infrastructure components, as well as troubleshooting tools. 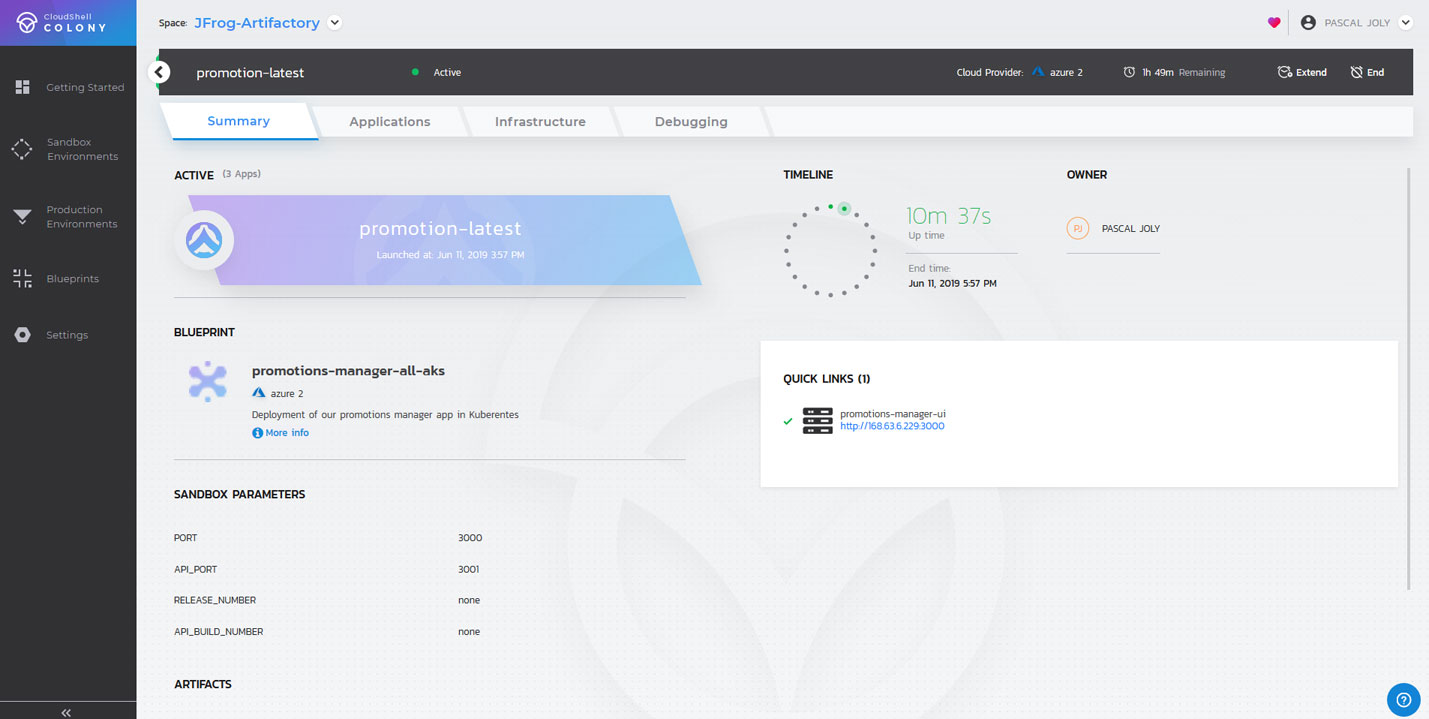 Finally, once the test phases are complete, it is time to release the application to production. To do so, blue/green deployment provides a gradual introduction of the new version to a percentage of users, giving additional time to get feedback and take corrective action if needed. This is a very simple task to perform with CloudShell Colony, either through the web UI or through API.

From Build to Release to Production

Integrating Artifactory into CloudShell Colony provides a fully automated, end-to-end workflow from the creation of a new build artifact to deploying the corresponding application on a newly created VM in a CloudShell environment. The rapid transition from an on-prem build to a cloud installation provides the agility and increased velocity that is core to the DevOps process and ensures that applications are deployed into production-like environments.

Combining the highly scalable power of Artifactory with the orchestration and automation of CloudShell enables deployment of version-controlled  artifacts along with their associated infrastructure. Working together, they help bring speed and fidelity across the CI/CD pipeline workflow, enabling enterprises to scale DevOps to their entire organization.